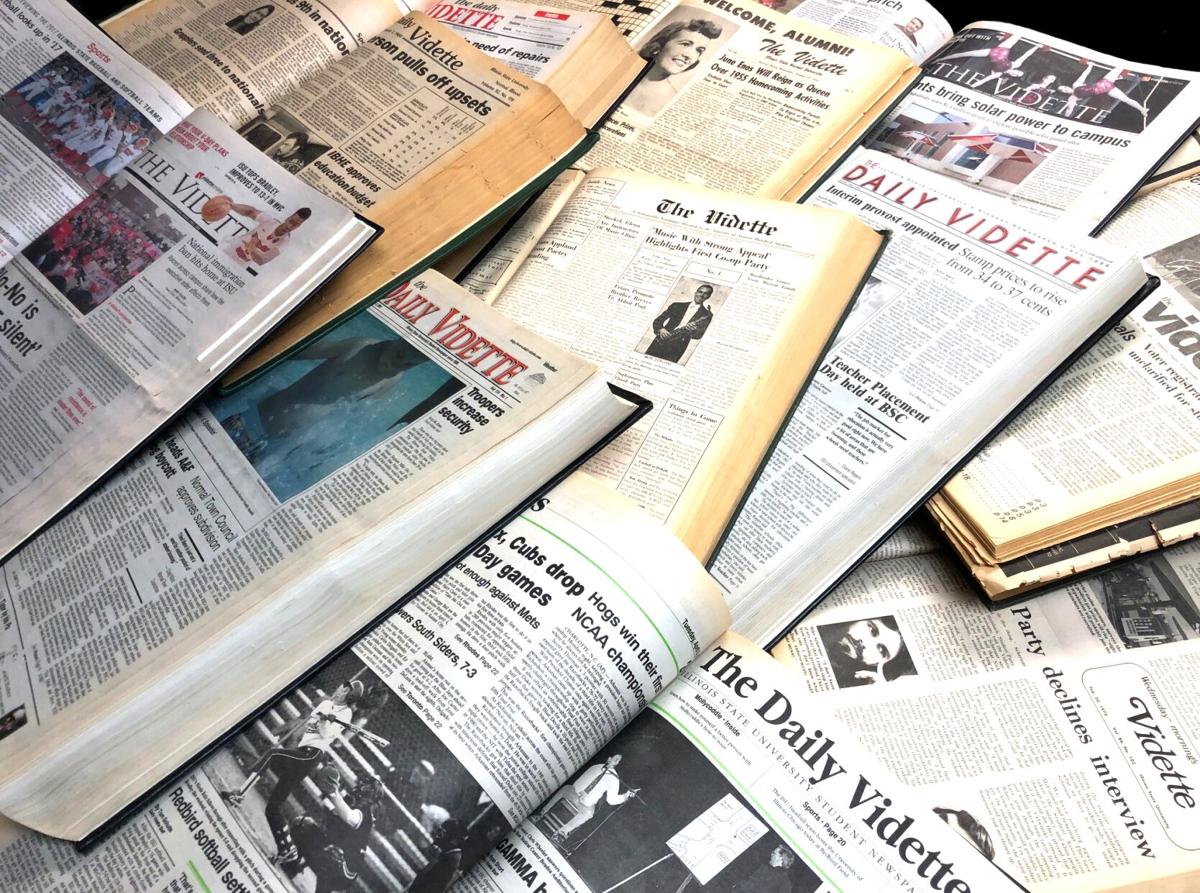 The Vidette has served the Illinois State University community in some printed form since 1888. Beginning with the 2021 fall semester, the organization will not longer print newspapers, but become a digital-only news outlet and learning lab. 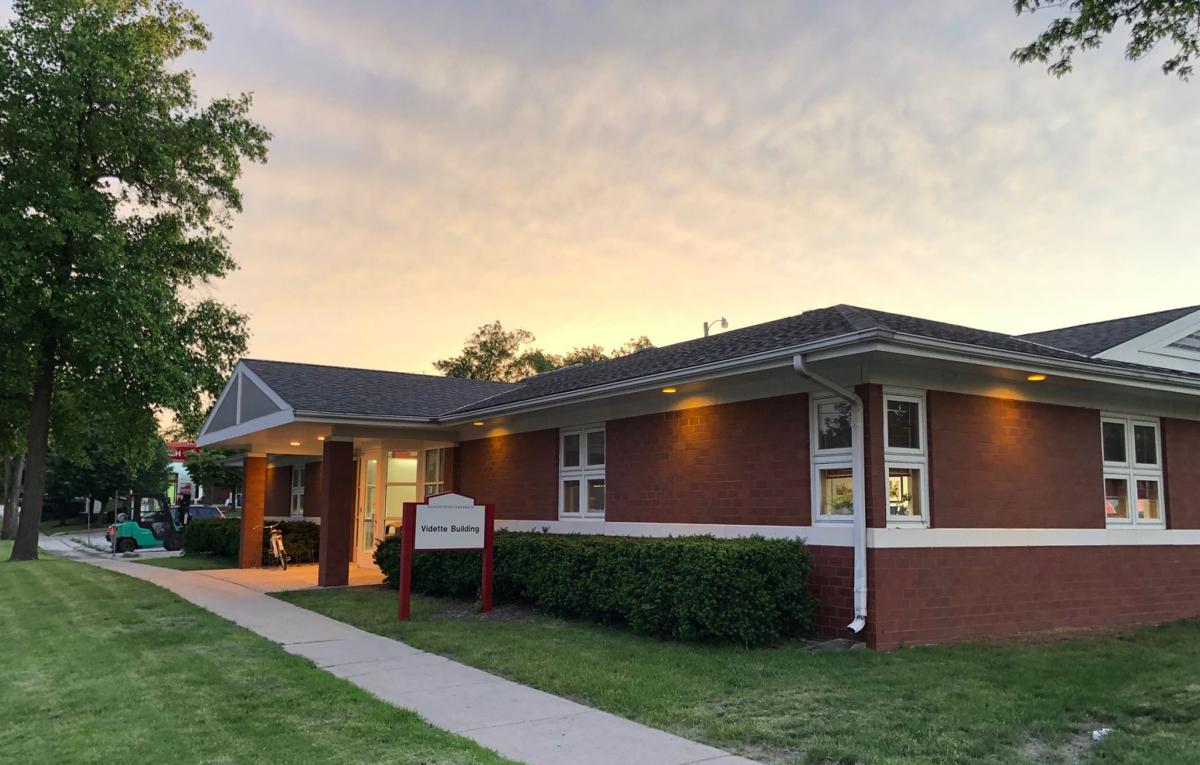 The Vidette Building at the corner of Locust and University at the north edge of the Illinois State University campus in Normal. The building was opened in 1996. 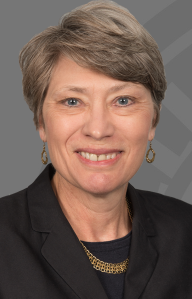 Dr. Diane Zosky, interim dean of the College of Arts and Sciences 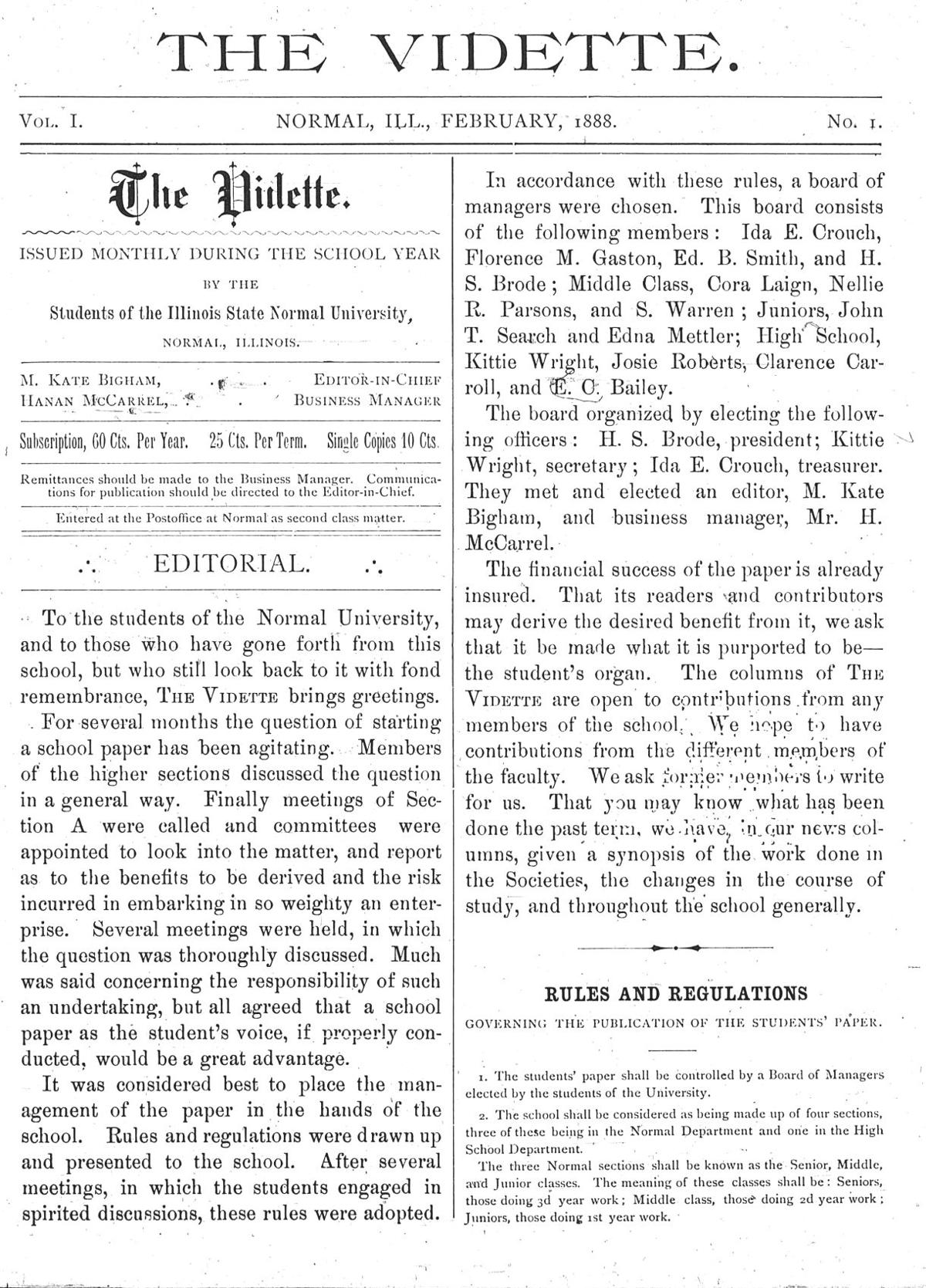 The first edition of The Vidette was printed in February, 1888. The cost per edition was 10 cents. 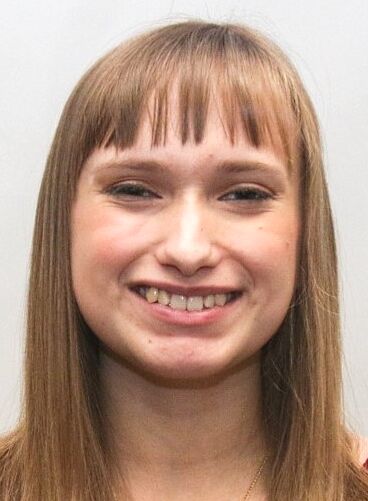 Elizabeth Seils, editor in chief of The Vidette for the 2020-2021 school year 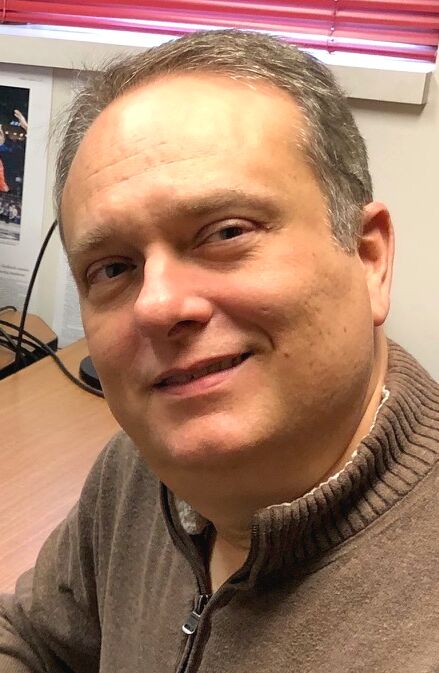 Eric Hoss, chairman of The Vidette Publication Board and former editor in chief of the newspaper 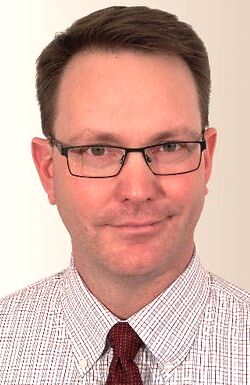 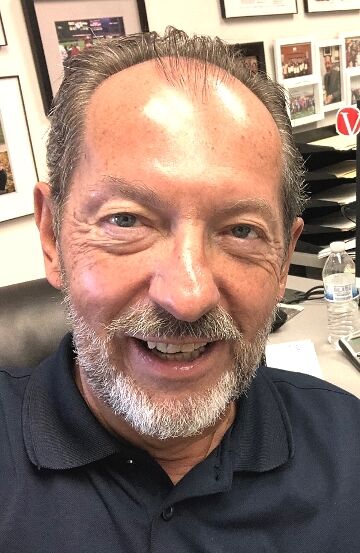 The student-run newspaper at Illinois State University has been published in some printed form since 1888, but beginning in August, content created by student-journalists will be delivered exclusively through its digital platforms – website, social media channels, newsletter and mobile app.

“Any time you turn off a machine that has been running steadily for 132 years, it’s a disheartening. But it’s important to understand that we are not turning off The Vidette. The printed papers may cease to flow, but the news and the learning opportunities for students at Illinois State will continue and we believe may potentially grow.”

Economics was a primary driver in the decision to cease printing. Advertising revenue generated by printed newspapers has plummeted in recent years. The steep decline in advertising revenue, further complicated by the COVID-19 situation, is vexing campus and commercial newspapers across the country. Meanwhile, rapidly advancing technologies have fueled a wide readership shift from traditional printed forms to digital channels.

Vidette General Manager John Plevka said he has mixed feelings about the upcoming reformulation of The Vidette.

“Any time you turn off a machine that has been running steadily for 132 years, it’s a disheartening. But it’s important to understand that we are not turning off The Vidette,” Plevka said. “The printed papers may cease to flow, but the news and the learning opportunities for students at Illinois State will continue and we believe may potentially grow.”

One part of The Vidette’s mission is to provide information to readers about the ISU community, but another part is to provide a learning environment for students and prepare them to compete for a wide-ranging jobs market.

“Today that market is demanding that candidates for jobs and internships be digitally skilled,” Plevka said. “The Vidette has been aggressively trending in the digital direction for about the last 10 years. This latest development should allow the organization to focus even more keenly on helping students develop skills needed to effectively create and smartly manage digital content.”

Current Editor in Chief Elizabeth Seils will be at the helm during the final days of The Vidette being a print-based operation next spring.

"It will definitely be a shift to stop printing the paper, but I see it more as a challenge than a tragedy,” Seils said. “We only have a certain number of papers left, so I see it as the chance to make those final papers something truly outstanding and memorable.”

The Vidette is not the first Illinois student newspaper to shift to an all-digital product. The Western Courier at Western Illinois University made a similar move earlier this year.

In addition to the format change, an organizational shift is also in the offing. The Vidette will continue to be a part of the School of Communication and it will remain in its building at the corner of Locust and University. However, the traditional advertising department, staffed by students and a part-time professional business adviser, will be eliminated as of July 1, 2021. Also, the position of general manager will be scaled back to that of strictly an editorial adviser. Business and administrative oversight will be assumed by WGLT, ISU’s National Public Radio affiliate, and its General Manager R.C. McBride. Like The Vidette, WGLT is a part of the School of Communication.

Stephen Hunt,  executive director of the School of Communication, said the partnership has the potential to create new opportunities for The Vidette and its staff.

“We are hopeful that the new operational model for The Vidette will create organizational efficiencies and potentially opportunities for students to reach an even larger audience through the national NPR platform,” Hunt said.

Efforts are also underway to engrain The Vidette more deeply into the School of Communication curriculum. For much of its history, The Vidette was a standalone and self-supported organization at ISU, but in 2010, it became a part of the SoC. While Vidette staff members have been encouraged to take journalism courses and related internships, they were not required to do so. Moving forward, some required coursework will be developed that is more “Vidette specific” for staff members.

“The transition has provided a critical opportunity to align operations of The Vidette more closely to the journalism curriculum in the school,” Hunt said. “This will ensure that students working at The Vidette have the training and skills necessary to maintain one of the finest student newspapers in nation.”

Twice in the last three years, The Vidette has won first place for overall general excellence in annual competition with other student publications, including those at the University of Illinois and Northwestern University, in the Illinois College Press Association contest.

The new organizational structure will not impact the independent status of The Vidette under guidelines of the Illinois College Campus Press Act. The 2008 act guards the independence of student media outlets at public universities in Illinois. Among its protections, the law assures that content published by student media is “not subject to prior review by public officials of a state-sponsored institution of higher learning.”

Also, some form of the traditional Vidette Publication Board will be retained under the new structure. Details are still being finalized, but the board will likely be composed of Vidette alumni and is expected to continue to serve in an advisory capacity to the student managers and the editorial adviser.

As the funding problems mounted for The Vidette, a transition committee of individuals with vested interests in the organization was formed last summer. The mission of the panel was to develop a new, sustainable Vidette model. The updated model is designed to retain journalism training opportunities for students at ISU, continue to provide valuable content for local readers and be less dependent on advertising dollars for operating revenue.

Diane Zosky, the interim dean of the College of Arts and Sciences, praised the efforts of the transition committee, which developed the new Vidette plan in about four months.

“I am incredibly impressed with the thorough and creative work the transition team has done so that Illinois State University can continue the long tradition of our campus newspaper,” Zosky said. “The plan from the committee will provide a rich learning lab for our journalism students that is more closely integrated with the curriculum from the School of Communication. “

Over the generations, a parade of Vidette alumni have credited experiences gained at the newspaper for helping pave the road to successful professional careers in a wide array of fields. That alumni base, often referred to as “The Vidette Family” remains dedicated to the survival of The Vidette.

“We know there will be many alums who will be saddened and concerned by these developments,” Plevka said. “But we also know that these folks recognize that the landscape of 21st century journalism has shifted dramatically in a relatively short period of time.”

Eric Hoss, current chairman of The Vidette Publication Board and member of the transition committee, is one of those alums. He was editor in chief of the newspaper during the 1986-1987 school year.

“Thousands of ISU students have benefitted from their experiences at The Vidette allowing them to practice their future trade to make them better prepared for the professional job market,” Hoss said. “The Vidette focus on the learning environment is critical to ensure students in the future will have that same outstanding experiences the Vidette alumni have enjoyed. As a result, the alumni will stay very active in the future of the Vidette.”

One opportunity to support the evolving Vidette will come in 2021, Plevka said.

The Vidette will continue to be printed on a weekly basis during the upcoming spring semester. It is scheduled to publish its final edition of the newspaper on April 27, a week before spring finals at ISU. Plevka said that student managers are in the process of developing a plan for a special commemorative edition of the newspaper to be published in late April or early May.

“Dating back to 1888, The Vidette is a treasure trove of Illinois State history. As such, the paper is woven deeply into the fabric of the school,” Plevka said. “So, as we prepare to close the chapter on the printed Vidette, we would be remiss to not salute the efforts of the countless students — the journalists, the sales representatives, the designers, the production workers and the delivery staff. We hope the special section will serve as a testament to their hard and valuable work.”

Plevka said in the weeks ahead, current Vidette staff members will turn to those who came before them and seek alumni support for the commemorative edition in the form of favorite memories from their ISU days and, perhaps, in the form of financial sponsorships.

Plevka noted that once all financial obligations are met for production, printing and distribution of the special section, all remaining proceeds will be funneled into The Vidette’s Foundation fund. That fund can only be used to directly benefit Vidette student workers.

“We hope the special section will be a nice way to pay tribute to The Vidette’s past, while also planting seeds for its future,” Plevka said.

Changes are likely in store for the student newspaper and website at Illinois State University.

This past weekend, The Vidette participated in our annual Illinois College Press Association conference.

For the first time since the Birds Give Back annual day of giving took flight, Milner Library will be focusing on a project for the annual Day…

Kellie Foy has been named the next editor in chief of The Vidette.

What do you think about GWU's vote to accept ISU's contract?