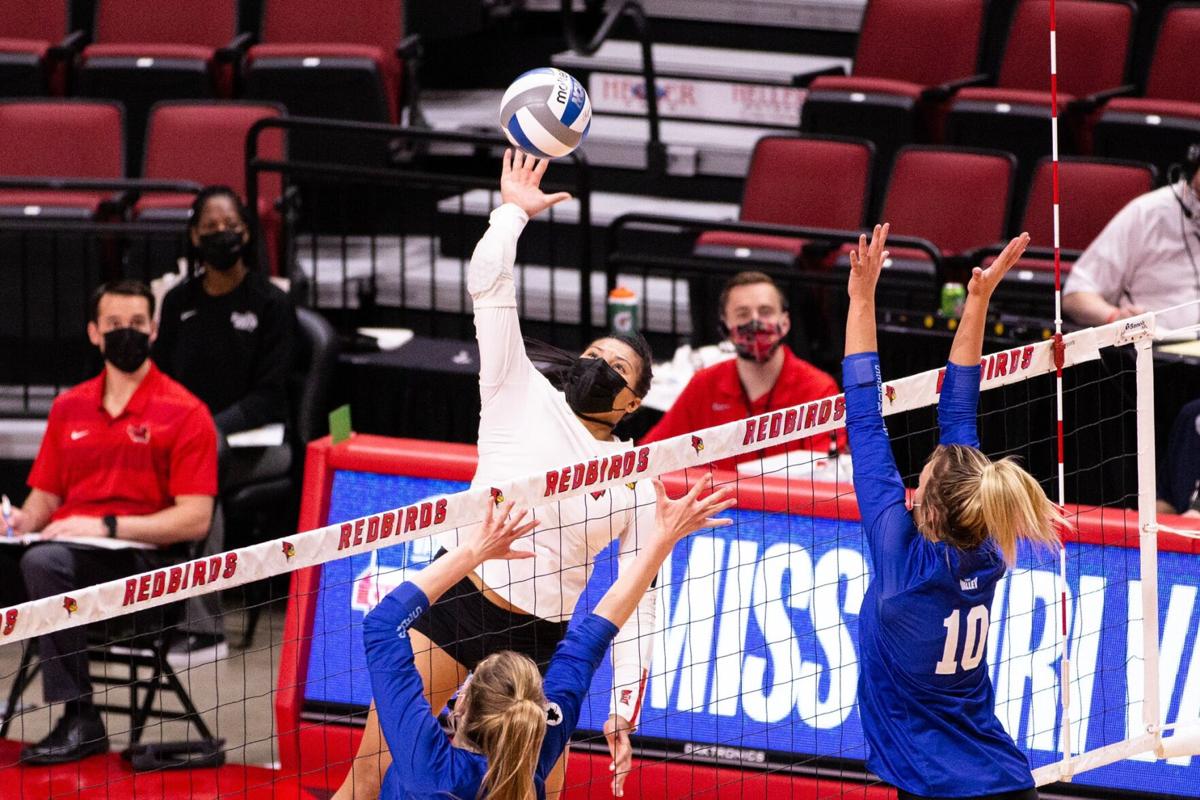 Illinois State senior Kaylee Martin going for a kill in the Redbirds’ round one game with Indiana State in the Missouri Valley Conference Tournament. Martin finished with 12 of the Redbirds 51 kills. 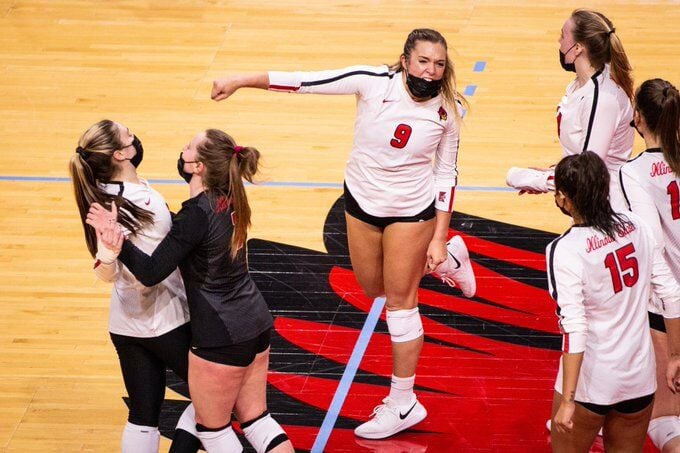 Illinois State's volleyball team celebrating during its three-set win over Indiana State in the first round of the Missouri Valley Conference Tournament. 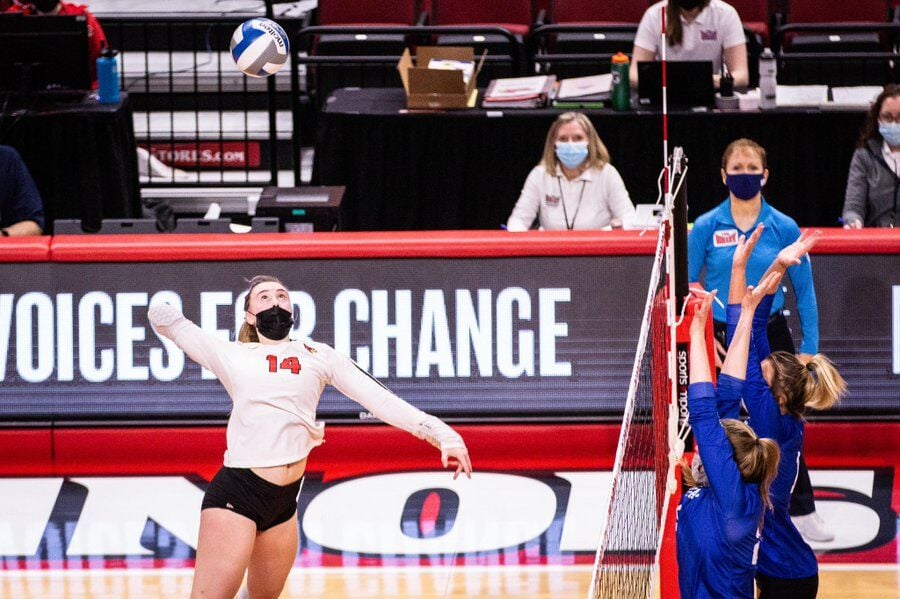 Illinois State's Sarah Kushner going for a kill against a wall of Indiana State defenders.

After one match, the rest of the field of teams in Normal for the Missouri Valley Conference Volleyball Championships have been made aware of something they may have already known: the hosts are anything but normal.

The Illinois State volleyball team put together a dominant yet hard-fought 3-0 sweep win over Indiana State to open the tournament at Redbird Arena, their seventh win in a row including the regular season.

“After so much adversity throughout the season, we were ready to start this weekend.” Sydney Holt, who led the Redbirds with a .500 hitting percentage on the day, said. “We were really fired up. I think we executed our scouting really well. It was an overall team effort.”

The Redbirds came out flying, building a 12-3 lead early in the first set. Sticking with the aggressive serving that has found success all season, they scored six straight points with Kaity Weimerskirch serving, four of which came as Sycamore errors.

They did not let off the gas, building a double-digit lead to force Indiana State’s second timeout at 16-6 after a big block by Sarah Kushner. Blocking was the name of the game for the Redbirds in the set, stacking up a team total of five on their way to a dominant 25-13 victory.

Head coach Leah Johnson said this was all part of the Redbird plan to specifically target weaknesses on the Sycamore’s side.

“We really executed the scouting report,” Johnson said. "It always helps when the block turns into a point. Our team does a lot of scouting on their own, and they were certainly ready.”

The Sycamores kept it closer to start the second set with long rallies, limiting the Redbirds fast-paced attack. Indiana State went on a 5-1 run to tie it at 12-all, then went on to take the lead at 16-15 to force a Redbird timeout.

Out of the timeout, Illinois State again utilized serving to take control back from the Sycamore’s long rallies. They went on a 6-2 run to take a 21-18 lead, fighting hard for big points with Stef Jankiewicz and Carley Nicholson both taking a turn behind the service line.

Finally, with Kendal Meier serving, they scored three unanswered points to take the set 25-20. Two of the four points were attack errors by the Sycamores as a product of aggressive serving from ISU.

“I think our serving was out first line of offense, and is what put them on the defense.” Johnson said, “We got a lot of free balls, down balls and a lot of predictable playsets.”

The Sycamores came out fighting in the third set, building a 5-2 lead and not letting ISU finish the match without a battle. The Redbirds, however, reminded them why they are the No. 1 seed this weekend.

Brilliant setting by recently named MVC Setter of the Year Jankiewicz (41 assists) set up big kills for Kushner (11), Sydney Holt (12) and Kaylee Martin (12), squashing any Sycamore hope to score from long rallies. Once they grabbed control, they never let it go.

The Redbirds scored six unanswered points to pull away and take a 20-12 lead, never letting up until a big kill by Kushner won the set and match 25-17. This has moved the Redbirds one step closer to a third-straight MVC tournament title.

The Redbirds now move on to the first semifinal, scheduled for 2 p.m. April 2.p. Following the ISU vs. Indiana State quarterfinal, Bradley and Valparaiso were set to face off to see who would go up against the Redbirds, but COVID-19-related issues on the Valpo side caused the game to be cancelled. Bradley has automatically moved on to face Illinois State, a rematch of the I-74 rivalry that was split in the two meetings earlier this season. Despite the Braves getting extra rest and not being able to scout today, Johnson and the Redbirds are confident that they will show up again tomorrow ready to fight.

“In everything that we’ve dealt with this year, and in the scheme of what's a disadvantage, this isn’t it.” Johnson said. “We’re going to show up and battle.”

“It was a long time ago when we played them [Bradley] last,” Holt said. “It’ll be exciting to see how we’ve grown over the season. We did split with them, so we want revenge for that last game we lost.”

Jankiewicz named Setter of the Year, among five Redbirds on All-Valley team

Kushner earns Valley Player of the Week after sweep of SIU

Volleyball set to host conference tournament as No. 1 seed

Five things to do this weekend in BloNo

Looking for some weekend plans to get you in the spirit of this warm Easter weekend weather? Check out these five things to do in the Blooming…

Volleyball advances to Championship round with 3-1 win over Bradley

This season, with all its challenges, was unmatched. The championship match was not without its flaws. However, when it mattered most, the 202…