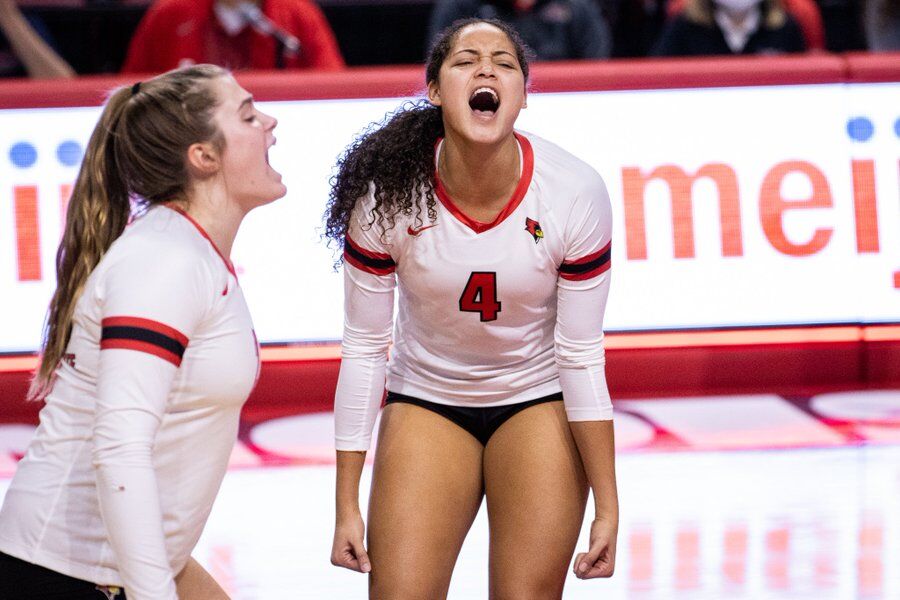 Illinois State volleyball's Aliyah Moore (4) and Katelyn Lefler celebrating during the Redbirds set one win over Bradley on Friday, Nov. 10. 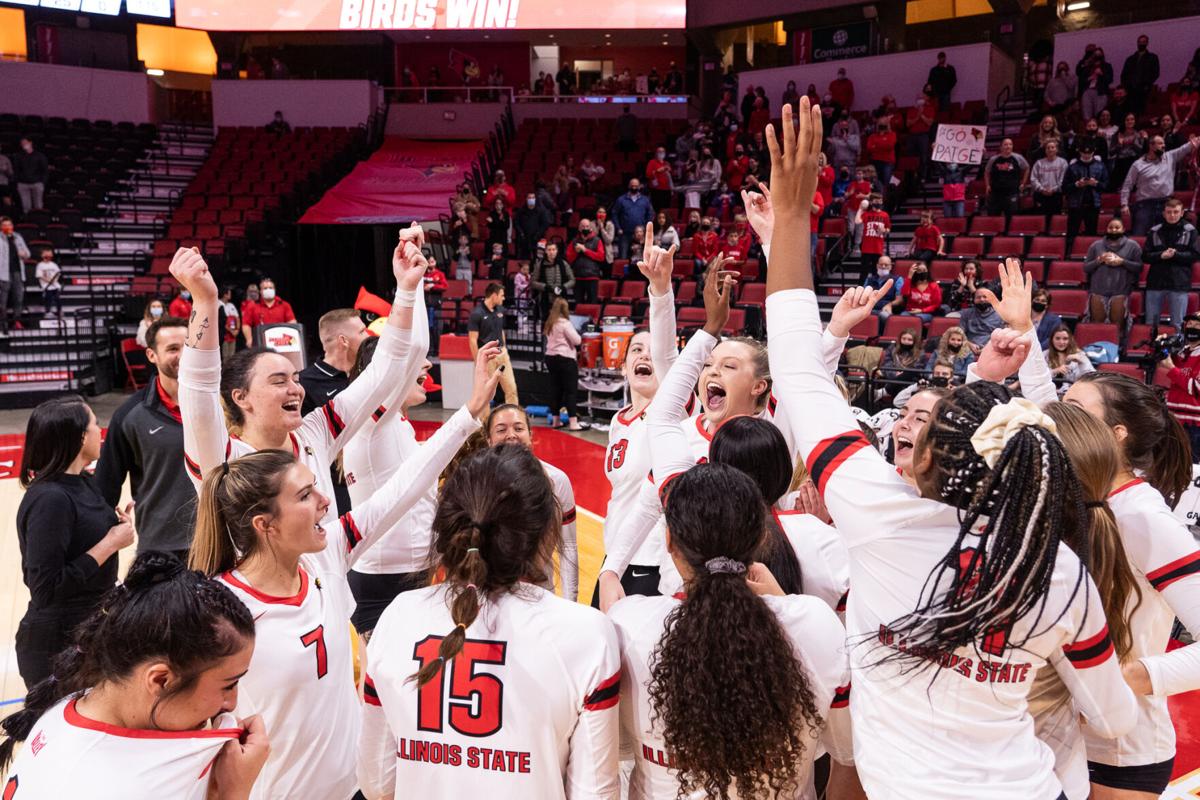 Illinois State volleyball celebrates after sweeping Bradley in their final regular season game of the season on Friday Nov. 19, in Redbird Arena. 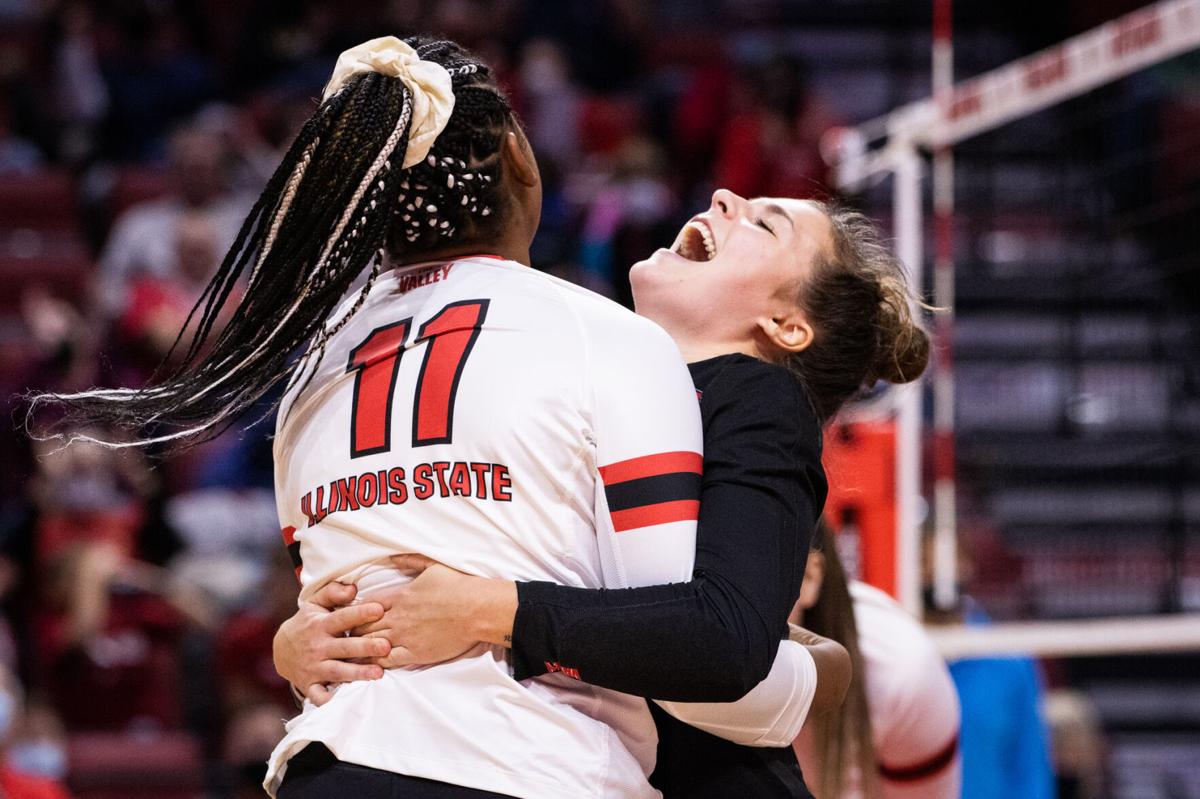 Illinois State's Kaity Weimerskirch (3) hugs Paige Hilliard (11) after she earned the Redbirds a point against Bradley on Friday Nov. 19, in Redbird Arena.

The Redbirds' three-set victory came in three unique ways— a nail-biter, a comeback and a blowout. It completed a season sweep against the rival just down I-74 and sent out three seniors with a bang.

The Redbirds started the opening set with four service errors out of Bradley’s first seven points, but they managed to still find points against the Braves’ serves. Led by Nicole Lund’s two kills and a block early on, the Redbirds took the lead at 7-6 and held it until another service ace gave Bradley a 13-12 advantage.

The Braves capitalized on these errors and built a 4-0 run, taking the biggest lead of the set thus far at 15-12 and forcing head coach Leah Johnson’s first timeout.

Out of the timeout, the Redbirds looked to shake off the errors and took the lead back at 17-16 after a Jessica D’Ambrose service ace. At 20-all, ISU’s Aliyah Moore met BU's Silan Demirkol at the net, but another service ace gave the Braves another chance at 23-all.

The Redbirds went on to win the set 27-25 after yet another block by Lund and Nora Janka. In an imperfect set that included seven Redbird service errors, ISU utilized strong net presence and out-blocked the Braves 7-3 on its way to a hard-fought set one victory.

The Redbirds averaged 2.4 blocks per set, so the seven in the opening set Friday was crucial to cover their same amount of missed serves.

“We did a nice job at the net defending their middles,” Johnson said. “Our serving cleaned up. We leveled out. Jess [D’Ambrose] came in and served aggressively, and that gave everyone else confidence.”

The Redbirds got out to a 6-3 lead in set two, looking to keep control in the middle sets against their rival. BU's Kaylenn Hunt made two attack errors to build the ISU lead at 9-5 and force a Braves timeout. Out of that, the Braves turned the tables to take the lead back at 12-9 and force another Redbird timeout.

Tamara Otene had a service ace for the Redbirds at 19-16 with the Braves leading but had a service error two points later. Nonetheless, the Redbirds orchestrated a 7-1 run during that time to take their first lead since 9-5 at 21-20. That run ended up being incredibly crucial, as a Sarah Kushner kill sealed the deal at 25-22 to give the Redbirds the win in a comeback fashion, and take the 2-0 match lead.

Into the third set, the Redbirds kept their foot on the gas against their rival with back-to-back service aces by captain Kaity Weimerskirch. After falling down 9-3, the Braves called a timeout to try and slow down the Redbirds. Bradley got out to a 2-0 run after the break, but a flock of ‘Birds met Kora Kauling at the net to take the serve back.

ISU senior captain Carley Nicholson came in to serve and received a round of applause from the fans on her senior night before getting another point to keep building the lead.

With a dominant 20-7 lead, senior Leigha Malecha subbed into her own applause, before the final Redbird senior Paige Hilliard did the same. Hilliard had a kill to make it match point, before a service error by Kauling gave the Redbirds a sweeping victory, 25-10.

“To be able to end the match on court with my fellow seniors was truly special,” Nicholson said. “After the match, we all got to hug each other and it was really special. The entire night was amazing, I can tell the team and staff really wanted to win the night for us.”

Kaitlyn Prondzinski led the match with ten kills. Katelyn Lefler had 19 assists, and Lund had six blocks. In all, it was a full-team effort on Senior Night in the sweep.

“We had a lot of time to work in practice this week,” Prondzinski said. “Tonight, we played for more than just ourselves. We played for our seniors, and I think that showed.”

The win gives ISU, at the very least, the tournament two-seed, but Loyola’s one-seed is not secured. ISU's loss to Drake tonight and its advantage in a tiebreaker means with another Ramblers loss tomorrow at 6 p.m. against Northern Iowa, Illinois State will take the top-seed and split the MVC regular-season title. With a Loyola win, ISU will stay in the two-seed.

“We’re going to be watching tomorrow,” Johnson said on Loyola vs UNI. “There’s a lot of opportunity for us, but right now it's all about the bye...this team deserves to be regular-season co-champions, but at the end of the day we have to win the tournament to go to the postseason [NCAA tournament].”

Regardless of what happens with seeding, the Redbirds' win Friday night secured a first-round bye, of course, but also much more; it secured hope. Hope for this young team, the youngest in the MVC. Hope that these Redbirds can and will compete against the top teams in the conference next weekend, still hungry for the title and not letting the two-in-a-row behind them affect this season and this time.

“Our team is very young, so it’ll be about reminding them that we need to take it a game at a time.” Nicholson said, “We’ve played these teams all before. We know who we are.”

For the third time this season, and the second week in a row, Illinois State sophomore Tamar…

In Saturday night’s battle between the two top teams in the Missouri Valley Conference, the …

After a successful season that saw Illinois State volleyball earn a No. 2 seed in the Missouri Valley Conference Tournament, some of the Redbi…

One away from three straight.