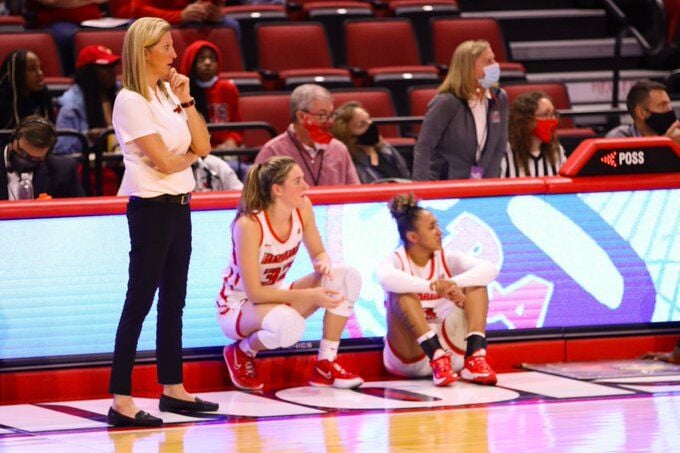 Illinois State women's basketball's head coach Kristin Gillespie on the sidelines with Kate Bullman and Jada Stinson during the exhibition game on Nov. 3 at Redbird Arena. 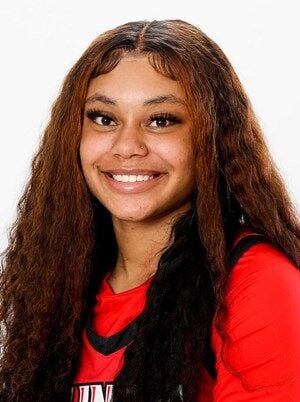 The Redbirds got off to a rough start, trailing 6-0 early, but Maya Wong connected on a free throw and one three to tie the game at six. Wong would score eight of the Redbirds' first 11 points to get ISU going offensively.

The UT Martin zone defense would then become a problem for the Redbirds as it forced six turnovers in the first quarter. ISU would fail to score in the last five minutes of the first quarter to trailing 16-11 at the end of it.

Juliunn Redmond would help pick up the pace for the Redbirds by scoring the first four points of the second quarter and then passing it off to Lexi Boles who would drill a free throw line jumper to cut the lead to one.

UT Martin’s Holly Forbes would go on her own 7-0 scoring run to extend the lead to 25-17 by hitting a jumper, layup and a few free throws.

Jada Stinson would cut into UT Martin lead by hitting back-to-back threes to make the score 29-28 with 2:13 left in the second quarter. The Redbirds' defense picked up in the second part of the quarter to force a shot clock violation and a few errant passes from UT Martin.

However, the Redbirds still trailed 31-28 going into the half.

The Redbirds would start out in a zone defense to start the second half, but UT Martin’s ball movement found open shooters to extend its lead to 41-31 with 5:22 left in the third.

The Redbirds struggled to get anything going to start the second half with DeAnna Wilson accounting for the only three points that the Redbirds would score in the first six minutes of the third quarter.

The Redbirds went one of 10 from the field in the quarter and could not get anything to go. The bulk of their points came from the free throw line where they went 5-7.

UT Martin would take a 46-36 lead at the end of the third quarter.

Wilson and Stinson cut the lead to three with Wilson getting back-to-back buckets and Stinson hitting a three.

The Redbirds' man-to-man defense helped prevent UT Martin from scoring for the bulk of the fourth quarter to cut the lead to 46-45 with four minutes remaining.

Redmond would get the ball to Wilson who would bank in a layup to give the Redbirds a 47-46 lead with 2:46 remaining.

“I’m really proud of the way we battled down the stretch. It didn’t go our way today but it’s important to be tested in situations like that early in the season. We’ll learn from this and get back to work on Monday.”

UT Martin regained the lead and then Paige Pipkin would extend its lead to three with a pair of free throws.

Mary Crompton hit a three to tie the game with 25 seconds left, but 24 seconds later, the Redbirds fouled Seygan Robins who nailed two free throws to give UT Martin the lead with one second left.

Four timeouts were called before the final play occurred, mainly due to both coaches subbing players in and out, so they could get the advantage that they were looking for.

On the final play, Redmond got off a sideline jumper but was unable to connect to give UT Martin the win.

“I’m really proud of the way we battled down the stretch. It didn’t go our way today but it’s important to be tested in situations like that early in the season. We’ll learn from this and get back to work on Monday,” ISU head coach Kristen Gillespie said.

Pipkin led UT Martin in its win with 17 points. Wilson led the Redbirds with 14 points and seven rebounds. Stinson and Wong poured in 12 points apiece.

The Redbirds will be back in action Friday when they head to California to take part in the UC Irvine Thanksgiving Classic against UC Irvine. ISU will look to bounce back as it is now 1-3 on the season and have lost two straight.

In a matchup against Big Ten foe Purdue, the Redbirds were unable to keep up with the Boiler…