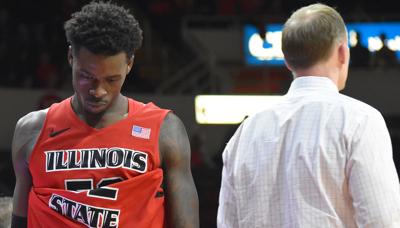 Unfinished business. This has been the motto for the Illinois State men’s basketball team this season. Players, coaches and staff members are often seen wearing shirts displaying these two words, a constant reminder to them of the loss they suffered to Loyola-Chicago last March in the Missouri Valley Conference tournament championship.

This season was supposed to be different. Despite being picked to finish second in the league behind the Ramblers, many sources close to MVC basketball thought the Redbirds had the pieces to win the 10-team league.

The ‘Birds brought back their four core seniors entering the season, three of which averaged at least 15 points per game (Milik Yarbrough, Phil Fayne, Keyshawn Evans) a year ago. This was a major reason that Yarbrough, an NBA prospect, decided to return to Normal for his senior season. ISU had the core group to return to the MVC title game, and this time, win.

While there have been some glimpses of a championship-level team, inconsistency has been the main storyline for the Redbirds this season.

Now, one could argue that the ‘Birds have struggled to mesh with new faces like Zach Copeland, Josh Jefferson and Rey Idowu. Arguments could also be made that luck has not been on ISU’s side, as they have dropped numerous close games down the stretch.

The point that can’t be avoided, however, is the youthful mistakes that ISU has continually made throughout the season. Case in point, Sunday’s buzzer-beating loss to Missouri State highlighted these youthful mistakes made by a veteran-leaden squad.

The ‘Birds led by five with 13 seconds left and failed to seal the deal. An errant inbounds pass by redshirt-sophomore Matt Chastain with five seconds left gave the Bears the opportunity to win.

While this banked-in half-court shot by MSU’s Jarred Dixon was a prayer to say the least, the Redbirds had multiple opportunities by numerous players to just dive on the ball, and time would have ran out.

Instead, they batted the ball around, hoping to reach an open teammate in the process. Dixon came away with the ball in the scramble and the Bears took home the win.

Again, one could say this is luck. Regardless, there is no way a team with multiple veteran pieces should let a game like this slide away, much less two games. The ‘Birds lost a similar game on a half-court heave at the buzzer at Valparaiso to begin MVC play.

Veteran teams close out games like this, even if they are on the road. Mental collapses down the stretch reflect youthful teams, or teams that still make youthful mistakes.

While Yarbrough (16.9 ppg) and Fayne (15.2 ppg) have continued their solid play into this season, Evans (8.1 ppg) averages seven less points than a season ago. It has been a rarity for all three of these core players to have a solid outing in the same game this year.

Copeland (10.9 ppg) and Jefferson (9.4 ppg) have picked up some of Evans’ offensive slack, but the ‘Birds have not been able to get into a consistent rhythm as a team.

Just over a week ago, ISU dominated Loyola 65-57, a team they had  previously lost four straight games to. After that contest, the ‘Birds look poised and confident. ISU fans were optimistic that this was the turning point in a season of disappointment, as the Redbirds were finally atop of the MVC standings.

Now after two straight losses, the Redbirds are back in third place at 7-5 (14-11 overall). Although regular season games don’t matter near as much as March games in St. Louis for teams like ISU, the level of play for the ‘Birds can certainly be considered “underperforming” for a team that had so much optimism entering the year.

ISU head coach Dan Muller has echoed throughout the season how his players, including his senior leaders, have failed to listen. He even repeated this after last Wednesday’s loss to the Crusaders, citing the lack of focus his team had prior to the game.

Lack of mental focus, effort and “bigheadedness” are traits of a team with an abundance of underclassmen. Not a team with four returning starters. Senior forward William Tinsley, who began the year as a starter, has quickly learned that lack of effort will quickly land you on the bench. Tinsley has seen his minutes diminish during MVC play, as Muller indicated Tinsley was not putting in the defensive work that he needed to.

Now entering a crucial point in the year, it will need to be these four seniors that turn things around and form some consistent play for the Redbirds heading into March.

Because the MVC is down this year, many thought ISU had a great chance of winning Arch Madness, maybe even better odds than the 2016-17 team did. But, to do that, the ‘Birds will have to eliminate these youthful mistakes and get back on track sooner, rather than later to reach the NCAA tournament for the first time since 1998.

The Illinois State men’s basketball team has fallen victim to half court buzzer beater’s twice this season, but Sunday’s loss at Missouri Stat…

It is no secret that play has significantly diminished in the Missouri Valley Conference this season. Unlike recent years, there is no team th…

Illinois State head coach Dan Muller has repeatedly said that he has wanted his senior class to go out on a high note by the end of this season.